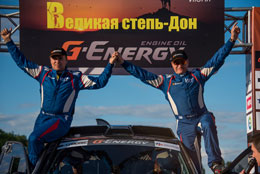 The race "Great Steppe – Don 2016" as arranged as part of the third stage of the Rally Raid Russian Championship and second stage up of Russian Cup. The Volgograd race was arranged in the complicated conditions of steppe the distance to cover of ore than 800 km, including 600 km of special stages.

Crew of G-Energy Team consisting of Vladimir Vasiliev and Konstantin Zhiltsov has secured a flawless victory at the third stage of the Rally Raid Russian Championship with runner-ups being almost one hour behind.

“Special award “”Adaptation to any situation” instituted by our Company for will-to-win spirit shown during the race goes to Viktor Khoroshavtsev and Roman Yelagin”, – says Roman Zimovets, Deputy General Director of Gazpromneft – Lubricants Ltd. During one of the stages, their crew faced breakdown of the entire navigation equipment but despite this the crew was able to continue and reached the finish “using eyes only” as racers say, i.e. by visual references only”.

Viktor Khoroshavtsev and Roman Yelagin were awarded with a certificate for motor oil and they can select any G-Energy product out of the entire range of Gazpromneft – Lubricants materials by themselves.

Gazpromneft – Lubricants (Gazpromneft – Lubricants LLC) is a subsidiary of Gazpromneft that specializes in the production and sale of oils, lubricants and technical fluids. Established in November 2007. Gazpromneft – Lubricants has 5 production sites in Russia, Italy and Serbia. Our total production volume amounts to 500,000 tons of high-quality oils, lubricants and technical fluids every year. The Omsk Lubricant Plant (OZSM) is Russia’s most state-of-the art complex for the mixing, filling and packaging of oils with a total annual mixing and packaging capacity of 300,000 tons. The management system in place at Gazpromneft – Lubricants and its production facilities conform with the stringent requirements of the international standards ISO 9001, ISO 14001, ISO 16949 and OHSAS 18001. The company supplies its products to the Russian assembly lines of DAIMLER KAMAZ RUS, KZ ROSTSELMASH, DERWAYS AC, KAMAZ, AVTOTOR (Hyundai assembly line), AZ GAZ, UAZ (Sollers), and BELAZ. Consumers of Gazpromneft – Lubricants products include Severstal, Sibur, Gazprom, Evraz, MMK, NLMK, Rusal, Alrosa, RZD and other leading industrial enterprises. The range includes 500 brands of oils and lubricants for all market sectors (more than 1,200 items of goods). The company’s products have earned the approval of more than 250 leading equipment manufacturers: BMW, Mercedes-Benz, Volkswagen, Volvo, Renault, General Motors, Cummins, MAN, ZF, KAMAZ, Avtovaz, Bosch Rexroth, and others. The company controls 15% of the Russian lubricant market and also operates in the CIS and the Baltics, Europe, Central and Southeast Asia, Africa, and beyond. In all, the company’s products are sold in more than 60 countries worldwide.