With the Support of Gazpromneft – Lubricants, the Final Stage of Russian Rally-Raid Championship Was Held 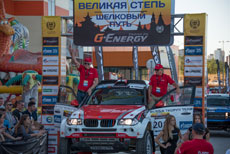 Velikaya Step, the final stage of the Russian Rally-Raid Championship 2016, was supported by Gazpromneft - Lubricants in three Russian regions, including the Volgograd and Astrakhan regions and the Republic of Kalmykia. 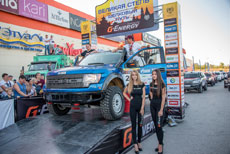 27 crews passed the start podium of the competition. The organizers prepared for the participants a track with many challenges: narrow sandy paths were followed by steppes, from where the rally moved to the hard tracks and vast sand massifs of the Astrakhan region.

More than a thousand natives of Volgograd visited the start of the race. The capital of Kalmykia, Elista, warmly welcomed the participants, and the final events were held in the center of Astrakhan attended by a vast assembly of citizens and guests of the city. 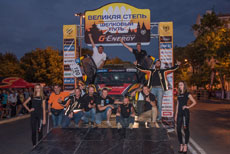 “This racing year turned out to be very eventful for the company's research team, every rally-raid was visited by our engineers with a mobile laboratory. The start of the season, Severny Les race, held in February in Karelia, allowed us to test G-Energy lubricants at low temperatures. Spring stages in Astrakhan and Volgograd tested oils on challenging routes. The transcontinental rally-marathon Shelkovy Put enabled to test the products in extreme conditions: within two weeks the cars were subjected to the maximum load, the rally was held in various climatic zones, starting with the Russian off-road washed out by rain and ending with red-hot desert sands of China, where temperatures often exceed 45 degrees Celsius”, said Roman Zimovets, Deputy General Director for Strategic Development and Marketing, Gazpromneft – Lubricants, “G-Energy oil tests carried on the tracks provided a productive science base and allowed confirming once again the high quality of our products.”

Gazpromneft – Lubricants Ltd (Gazpromneft-SM LTD) – is a subsidiary enterprise of Gazprom Neft, specializing in the production and sales of oils, lubricants and technical liquids. It was established in November 2007. Gazpromneft – Lubricants has 5 production sites in Russia, Italy and Serbia. Annual production totals 500 thousand tons of high-quality oils, lubricants and technical liquids. The most modern in Russia high-technology complex for blending, filling and packaging of oils operates at the Omsk Lubricants Production Plant. This production is designed for output of 300 thousand tons of oils, lubricants and technical fluids. Gazpromneft-Lubricants management and production assets systems are certified for compliance with ISO 9001, ISO 14001, ISO 16949 and OHSAS 18001. The company supplies its products to the Russian conveyors of Daimler KAMAZ RUS, ROSTSELMASH, AC DERWAYS, KAMAZ, AVTOTOR (for Hyundai car range), GAZ, UAZ (Sollers), Belaz. The consumers of Gazpromneft – Lubricants industrial products are Severstal, Sibur, Gazprom, Evraz, MMK, TMK, NLMK, RUSAL, ALROSA, Russian Railways, and other largest industrial companies. The product range includes 500 types of oils and lubricants for all market segments (more than 1,200 items). The company’s products have more than 250 approvals of leading equipment manufacturers: BMW, Mercedes-Benz, Volkswagen, Volvo, Renault, General Motors, Cummins, MAN, ZF, KAMAZ, Avtovaz, Bosch Rexroth, and others. The company is also engaged in the manufacture and sales of marine oils, supplies its products to the vessels of Sovcomflot, Rosmorport, Rosnefteflot, Norilsk Nickel, and other Russian and foreign shipowners. Due to the integration into Chevron global supply chain, the company’s customers are able to receive marine oil in more than 800 ports around the world. The company holds 15% of the lubricants market in Russia, and works in the CIS, Baltic States, Central and South-East Asia, Africa and other states. In general, the company’s products are represented in almost 60 countries of the world.