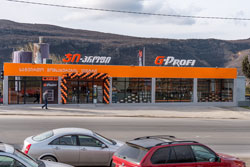 Within the framework of the international project of Gazpromneft-Lubricants for the development of partner technical service stations, the first maintenance station for trucks has begun operating in Georgia – G-Profi Service.

The station is located at 74 Avchala Street, Tbilisi, and is equipped with five repair bays, three of which are for changing oils. The maintenance service is designed to service commercial vehicles of various capacity – light, urban and line-haul trucks, as well as light and heavy construction equipment. G-Profi high-tech oils, which are developed for the modern commercial vehicles of the world’s leading manufacturers, are available for service stations customers. The capacity of the G-Profi Service is about 500 vehicles per week. 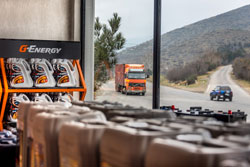 "We started cooperating with Gazpromneft-Lubricants primarily because of the high quality of its products," says Georgy Shamatava, Manager of G-Energy Service project in Georgia. "In 2016, we delivered over 800 tons of oils to Georgia, and most of this figure consists of products intended for use in commercial vehicles. To date, we have two G-Energy Service stations in Tbilisi and one in Batumi, but they are designed for light motor vehicles and light commercial vehicles, so the truck segment was not covered. Having analyzed the demand, we decided to open a service for commercial vehicles, where customers will receive services for replacing motor and transmission oils, lubricants for the hydraulic systems of construction equipment." 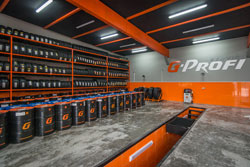 "The opening of the G-Profi Service station in Tbilisi marks a new phase in the development of our international program for partner service stations, which offer consumers a wide range of quality oils produced by our company. We chose Georgia to implement the pilot project for good reason – within the framework of the G-Energy Service program, one of the strongest networks for light motor vehicles operates within the country," says Alexander Trukhan, General Director of Gazpromneft-Lubricants. "We’re seeing that the G-Energy Service project has performed well in various markets. That’s why we decided to expand the project into a new segment."

Gazpromneft-Lubricants (Gazpromneft-Lubricants Ltd.) is a subsidiary of Gazprom Neft that specializes in the production and sale of oils, lubricants and technical fluids. Established in November 2007, Gazpromneft-Lubricants operates six production sites in Russia, Italy and Serbia. Total production volume amounts to 500,000 tons of high-quality oils, lubricants and technical fluids per year The Omsk Lubricant Plant (OZSM) operates Russia’s most advanced process line for the mixing, filling and packaging of oils with a total annual mixing-and-packaging capacity of 300,000 tons. The management system established at Gazpromneft-Lubricants and its production assets conforms to the requirements of the international standards ISO 9001, ISO 14001, ISO 16949, and OHSAS 18001. The company supplies its products to the Russian assembly lines of DAIMLER KAMAZ RUS, KZ ROSTSELMASH, DERWAYS AC, KAMAZ, AVTOTOR (Hyundai assembly line), AZ GAZ, UAZ (Sollers), and BELAZ. Consumers of Gazpromneft-Lubricants products include Severstal, Sibur, Gazprom, Evraz, MMK, TMK, NLMK, Rusal, Alrosa, RZD and other leading industrial enterprises. The product range includes 500 brands of oils and lubricants for all market sectors (more than 1,200 commodity items). The company’s products have earned the approval of more than 250 leading equipment manufacturers: BMW, Mercedes-Benz, Volkswagen, Volvo, Renault, General Motors, Cummins, MAN, ZF, KAMAZ, Avtovaz, Bosch Rexroth, and others. The company also produces and sells marine oils and supplies marine products for Sovcomflot, Rosmorport, Rosnefteflot, Norilsk Nickel and other Russian and foreign ship owners. By integrating into Chevron’s global supply network, the company’s clients are able to obtain marine oils in over 800 ports throughout the world. The company controls 15% of the Russian lubricant market and also operates in the CIS and the Baltic region, Europe, Central and Southeast Asia, Africa, and beyond. All in all, the company’s products are sold in more than 60 countries worldwide.