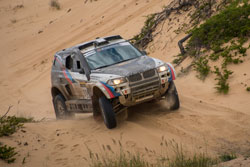 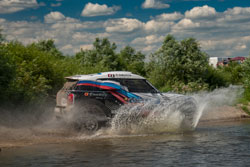 Five stages were scheduled for the Russian Championship this year, in three of which G-Energy Team won first place. The podiums of the toughest races, Severny Les (Northern Forest) in Karelia, Velikaya Step –Don (The Great Steppe- Don) in the Volgograd region and the Russian Championship stage held in the framework of the trans-continental marathon Shelkovy Put’ (Silk Road), enabled the team to score maximum points and become the winners of the season. 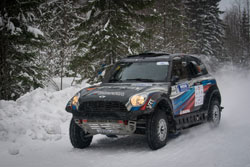 “We highly appreciate our long-term partnership with Gazpromneft - Lubricants. Cooperation with the company enables us to use the most advanced developments of one of the leading oil producers, which ensures trouble-free operation of the equipment in the most difficult conditions”, says Vladimir Vasiliev, a pilot of G-Energy Team. “Difficult season required endurance and persistence of our team, and the fact that we did not have to spend precious power to solve technical problems with lubricants helped us a lot, since G-Energy oils withstood all the trials and helped us to get a place.” 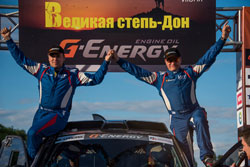 "Throughout the season, the units of the team’s sports cars, MINI ALL 4 and BMW X3, were operating using G-Energy Racing lubricants, which were constantly monitored by the technicians of our company”, said Roman Zimovets, Deputy General Director of Gazpromneft - Lubricants. “After each special stage, the lubricants were sampled, followed by their rapid analysis. The geography and the calendar of the Russian Rally-Raid Championship allowed testing the oils with Karelian frost, hard roads and sand of the southern regions, as well as the heat and off-roads in Russia and Kazakhstan. The results obtained will be the basis for the development of new high-tech formulations.”

Gazpromneft – Lubricants Ltd (Gazpromneft-SM LTD) is a subsidiary enterprise of Gazprom Neft, specializing in the production and sales of oils, lubricants and technical liquids. It was established in November 2007. Gazpromneft – Lubricants has 6 production sites in Russia, Italy and Serbia. Annual production totals 500 thousand tons of high-quality oils, lubricants and technical liquids. The most modern in Russia high-technology complex for blending, filling and packaging of oils operates at the Omsk Lubricants Production Plant. This production is designed for output of 300 thousand tons of oils, lubricants and technical fluids. Gazpromneft-Lubricants management and production assets systems are certified for compliance with ISO 9001, ISO 14001, ISO 16949 and OHSAS 18001. The company supplies its products to the Russian conveyors of Daimler KAMAZ RUS, ROSTSELMASH, AC DERWAYS, KAMAZ, AVTOTOR (for Hyundai car range), GAZ, UAZ (Sollers), Belaz. The consumers of Gazpromneft – Lubricants industrial products are Severstal, Sibur, Gazprom, Evraz, MMK, TMK, NLMK, RUSAL, ALROSA, Russian Railways and other largest industrial companies. The product range includes 500 types of oils and lubricants for all market segments (more than 1,200 items). The company’s products have more than 250 approvals of leading equipment manufacturers: BMW, Mercedes-Benz, Volkswagen, Volvo, Renault, General Motors, Cummins, MAN, ZF, KAMAZ, Avtovaz, Bosch Rexroth and others. The company is also engaged in the manufacture and sales of marine oils, supplies its products to the vessels of Sovcomflot, Rosmorport, Rosnefteflot, Norilsk Nickel and other Russian and foreign shipowners. Due to the integration into Chevron global supply chain, the company’s customers are able to receive marine oil in more than 800 ports around the world. The company holds 15% of the lubricants market in Russia, and works in the CIS, Baltic States, Central and South-East Asia, Africa and other states. In general, the company’s products are represented in almost 60 countries of the world.