The Northern Woods, a famous international race, was held in Karelia with support of GazpromNeft - Lubricants. The competition was of double status as the leg of the FIA World Cup and a leg of the Russian Cross-Country Rally Championship.

The Northern Woods is one of the most famous offroad races in the world. This is the only leg of the World Cup held in winter time. The race is held regularly since 2003. This year more than 30 crews embarked on the snow-and-ice surface race. The participants represented many countries of the world: Russia, Venezuela, The Netherlands, the Czech Republic, Poland, Brazil, Latvia, Italy, Finland, Belarus and other countries.

The event program was spread over three days. On the first day the participants underwent administrative and technical testing. An information stand of Gazprom-Lubricants Company was set up in the headquarters of the race. Athletes and reporters could hear a presentation of G-Energy oils testing program that could be run during rally raids. Technical experts of the company demonstrated the work of the mobile lab for analysis of lubricants and talked about selection of various oils for different kinds of competitions. 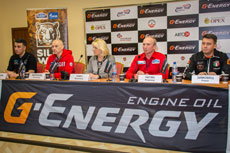 “We are working actively on developing our technical services by offering a unique method of monitoring the performance of lubricants in use,” said Roman Zimovets, Deputy General Director for Marketing and Strategic Development of Gazpromneft - Lubricants. “The Northern Woods race is especially important for our company as a unique testing ground for our products in extreme weather conditions.”

In two days of racing the teams covered more than 350 kilometers. The race track included not only sharp turns but high-speed straight stretches as well, which allowed the participants to create a great show for fans. 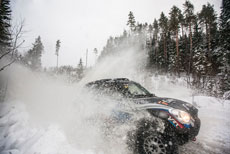 “I am of course very disappointed that for so many years in a row we have been coming second in Northern Woods event. After finishing, you begin reexamining the results, looking for mistakes, and the ways to eliminate them, because we are used to fighting for top positions on the pedestal. But since sport is always sport, we continued competing against our opponents to the last meter of the race. We are happy about the technical performance of our vehicle. This year again we used the Mini ALL4 Racing vehicle, which performs quite well on ice. G-Energy oils had once again provided for impeccable performance of the engine,” Konstantin Zhiltsov said.

A special prize in the nomination for “Adapting to Any Situation,” founded by Gazprom-Lubricants for crews who showed their victory spirit and adapted well to all trials of the race, went to the Finnish team of Tapio and Toni Lauronen. Soon after they started on their way, their vehicle overturned, but the crew managed to continue racing, and earned the best absolute result, becoming Russian champions in rally raids. The Finnish team received a gift certificate for G-Energy Oils and a technical support package from Gazpromneft - Lubricants.”