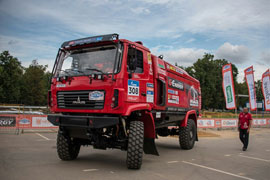 The race route will go through Russia, Kazakhstan, and China. The start of the tremendous rally marathon will be on July 8 in Moscow at Red Square. Two weeks later, on July 24, the finish will be in Beijing at Tiananmen Square. The rally marathon will be in different climatic zones: steppe roads, the Tien Shan mountain ridges and the Gobi Desert sands. The total length of the distance makes more than 10,000 km. 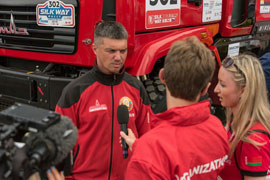 To participate in the Silky Way rally, MAZ-SPORTauto team cars pass complete technical reequipment - all three registered cars are of new construction, two of them are equipped with new engines. The MAZ-SPORTauto team has been using G-Energy oils of the special Racing line for three seasons already. The oil proved perfect in extreme conditions of off-road races, including multi-day ones, such as Dakar rally marathons. This time, all cars of the MAZ-SPORTauto team, operational ones and of technical support, are filled with lubricants and technical fluids manufactured by the Gazprom Neft — Lubricants company. During the rally marathon, the Gazprom Neft — Lubricants company specialists will daily collect samples of the used products, and monitor lubricants in a mobile lab giving necessary recommendations to the crew regarding oil changing. 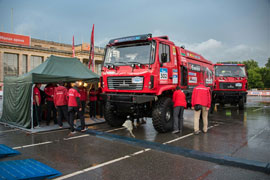 "Crews will stand the test of off-road. The technique will be working at breaking point in such severe conditions, adapting to the most difficult service environment. Our production will be tested during Silky Way as well. I can definitely say that G-Energy oils are ready to work for a marathon distance”, says Roman Zimovets, Deputy Director General of Marketing and Strategic Development of the Gazprom Neft — Lubricants company. “Promotion of goods through motorsport is a widely used marketing strategy. But as far as our company is concerned, we are not so much about sponsorship but about scientific and technical partnership. Thanks to being partners with MAZ-SPORTauto , besides the image we get the whole range of technical data testing our oils in extreme conditions of rally raids in our mobile laboratory. Races give us a unique opportunity of continuous technological updating and quality improving."

Gazpromneft – Lubricants (Gazpromneft – Lubricants LLC) is a subsidiary of Gazpromneft that specializes in the production and sale of oils, lubricants and technical fluids. Established in November 2007. Gazpromneft – Lubricants has 5 production sites in Russia, Italy and Serbia. Our total production volume amounts to 500,000 tons of high-quality oils, lubricants and technical fluids every year. The Omsk Lubricant Plant (OZSM) is Russia’s most state-of-the-art complex for mixing, filling and packaging of oils with the total annual mixing and packaging capacity of 300,000 tons. The management system in place at Gazpromneft – Lubricants and its production facilities conform to the stringent requirements of the international standards ISO 9001, ISO 14001, ISO 16949, and OHSAS 18001. The company supplies its products to the Russian assembly lines of DAIMLER KAMAZ RUS, KZ ROSTSELMASH, DERWAYS AC, KAMAZ, AVTOTOR (Hyundai assembly line), AZ GAZ, UAZ (Sollers), and BELAZ. Consumers of Gazpromneft – Lubricants products include Severstal, Sibur, Gazprom, Evraz, MMK, TMK, NLMK, Rusal, Alrosa, RZD, and other leading industrial enterprises. The range includes 500 brands of oils and lubricants for all market sectors (more than 1,200 items of goods). The company’s products have earned the approval of more than 250 leading equipment manufacturers: BMW, Mercedes-Benz, Volkswagen, Volvo, Renault, General Motors, Cummins, MAN, ZF, KAMAZ, Avtovaz, Bosch Rexroth, and others. The company controls 15% of the Russian lubricant market and also operates in the CIS and the Baltics, Europe, Central and Southeast Asia, Africa, and beyond. In all, the company’s products are sold in more than 60 countries worldwide.