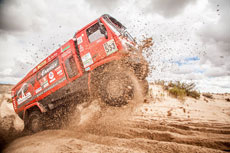 The Belarusian team MAZ-SORTauto posted the best results of the Dakar 2017 Rally Marathon in all of its years of participation in this prestigious competition, climbing to sixth place in the final standings among trucks.

During the race, the engines of the team’s “combat” vehicles, as well as those of the technical-support vehicles, were filled with G-Energy oils by Gazpromneft-Lubricants. Company engineers accompanied the team throughout the entire race, conducting real-time product tests in the field by monitoring the condition of the lubricants. 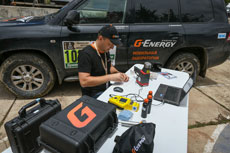 This year, the Dakar race, spanning a total distance of over 9,000 kilometers, started in the Paraguayan capital of Asunción. The initial stages of the route traced through the territory of Argentina, after which the racers veered into a stretch in Bolivia before returning to Argentina for the big finish in Buenos Aires. Aside from the dunes and the mountains, the athletes overcame dramatic fluctuations in elevation – as well as downpours, which caused two stages to be cancelled and added to overall the difficulty of the route. 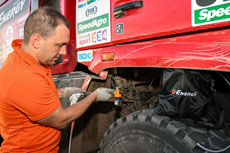 The MAZ factory team was participating in the Dakar marathon for the sixth time. For the third year in a row, the team raced with the support of Gazpromneft-Lubricants, using G-Energy-branded lubricants in different off-road races. A total of 50 crews participated in the rally’s commercial-vehicle class this year, of which just 42 "combat" vehicles made it to the finish.


Sergey Vyazovich, pilot of crew 511, team leader: “This rally-marathon was record-breaking for our team: we started with the youngest truck pilot in all of Dakar history – Alexei Vishnevsky, and posted our best result to date: Alexander Vasilevsky’s sixth-place finish in the overall standings and the inclusion of all three MAZes in the top-10 at stage 5, as well as the daily finish of at least one of the MAZes in the “top-ten.” DAKAR went well for us and I’m pleased with the results – as well as with our cooperation with Gazpromneft-Lubricants, thanks to whose specialists we had the chance to always get the latest information about the condition of the oils in our engines.”

Roman Zimovets, Deputy General Director for Marketing and Strategic Development at Gazpromneft-Lubricants: “Every day, our engineers monitored the condition of our G-Energy lubricants using a mobile laboratory that makes it possible to track the dynamic of changes in the oils being used – as well as their mineral content. On rest day, we oversaw the changing of the oils – from the transmissions, distributor boxes and engines of the “combat” vehicles. The tests that we conduct along race courses make it possible to keep developing our product line, incorporating the best advancements into our production of consumer oils and bringing to market more and more high-tech products with tremendous reserves of performance characteristics.”

G-Energy is Gazprom Neft’s premium brand of engine oils. G-Energy engine oils are designed for the latest European, American, and Japanese passenger vehicles. The unique adaptive technology ACF used in the oil provides enhanced performance characteristics depending on how the engine is used by activating the necessary additives as needed. In 2013, Gazpromneft-Lubricants was the first on the Russian market to issue a product range of G-Energy Racing 100% synthetic oils, developed for professional racecars and state-of-the-art sport cars. G-Energy Racing engine oils provide maximum protection against engine wear, and efficiently guard engine parts against the formation of deposits. They maintain their performance characteristics even under the peak-load conditions that are typical of racing.