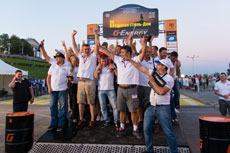 The race "Great Steppe - Don", which was the sixth and final stage of the Russia Championship and Cup on cross-country rallies was arranged with the support of Gazpromneft - Lubricants, took place in Volgograd. The G-energy brand was the competitions' general partner for the second year in a row.

The Volgograd stage presented an interesting race to the racers and their fans - in two days the rally participants covered more than 800 kilometres of sandy roadways. The route complexity was confirmed by the fact that out of 33 crews who commenced the race only 19 reached the finish. 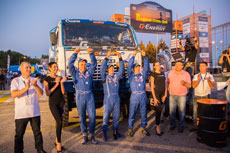 "The motor racing is one of the most efficient sites to test motor car products. The most important thing the cross-country rallies give us is a possibility to permanently improve the products quality," Roman Zimovets says, Deputy General Director for Marketing and Business Development of Gazpromneft-Lubricants. "Our highly-technological oils pass through the most complicated tests on the race tracks, they successfully demonstrate their advantages under circumstances of extremely rough roads. This was confirmed by the latest sports season, which gave all sports fans a lot of interesting and surprising moments.


The company “Gazpromneft - Lubricants” (Gazpromneft-SM LTD) - is a subsidiary enterprise of “Gazprom Neft”, specializing in the production and sales of oils, lubricants and technical liquids. It was established in November 2007. “Gazpromneft - Lubricants” has 5 production sites in Russia, Italy and Serbia. Total production volume is 500 thousand tons of high-quality oils, lubricants and technical liquids per year. In 2014, at the Omsk Lubricants Production Plant, the second phase of high-technology complex for blending, filling and packaging of engine oils was put into operation. This production, which is the most modern in Russia, is designed for output of 300 thousand tons of oils, lubricants and technical liquids. Management system of “Gazpromneft - Lubricants” and its production assets meet the requirements of international standards of ISO 9001, ISO 14001, ISO 16949 and OHSAS 18001. The company supplies its products to the Russian conveyors of Mercedes Benz Trucks Vostok, KZ ROSTSELMASH, DERWAYS JSC, KAMAZ, AVTOTOR (for Hyundai cars). The consumers of the industrial production of the company “Gazpromneft-Lubricants” are “Severstal”, “Sibur”, “Gazprom”, “Evraz”, MMK and other large industrial enterprises. The range includes 500 types of oils and lubricants for all sectors of the market (more than 1 000 commodity items). The company’s products have more than 250 approvals of leading equipment manufacturers: BMW, Mercedes-Benz, Volkswagen, Volvo, Renault, General Motors, Caterpillar, MAN, Scania, KAMAZ, Bosch Rexroth and others. The company holds 14% of the market of lubricants in Russia, as well as it is working in the Mediterranean countries, the Balkans, Eastern and Northern Europe, CIS, Baltic States, Central and South-East Asia, Africa and others. In general, the company’s production is represented in more than 50 countries of the world.