The first supply to the Dniester dredging vessel was carried out as part of the three-year agreement with Rosmorport signed in spring, 2017. According to the agreement, Gazpromneft-Lubricants is going to deliver 1500 tons of marine lubricants to the company's vessels. 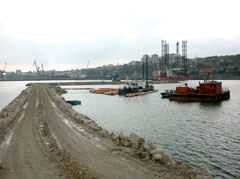 The sales territory of Gazpromneft-Lubricants’ marine products under the present agreements include the Northwestern, Far Eastern, Southern and North Caucasus Federal Districts of the Russian Federation.

Makhachkala is the second Caspian Sea port after Astrakhan where Gazpromneft-Lubricants provides a supply of marine lube oils.

Roman Miroshnichenko, Head of the marine lube oils business at Gazpromneft-Lubricants, says: "We supply marine lube oils to the port of Makhachkala in order to satisfy the growing market demand for marine lubricants of high quality. The Caspian Sea is a promising region with a great potential, and we plan to increase our presence in the area in the nearest future".