Gazpromneft-Lubricants opened the office in the Far East 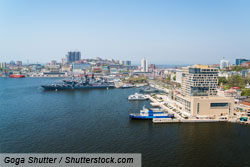 With the opening of a representative office in the Far East, the company has been able to work in the same time zone with its partners in the region, process customer requests faster and meet the needs of the market.

“We create appropriate conditions for conducting shipping business in the Far East”, comments Roman Miroshnichenko, head of the marine lubricants business of Gazpromneft-Lubricants. “Ports in the region are rapidly developing and becoming hubs. The level of services provided, including the quality of marine lubricants and technical services at competitive prices, will allow Vladivostok, the port of Vostochny and Nakhodka to become alternatives to the ports of Japan, China and South Korea.”

Gazpromneft-Lubricants Ltd is a subsidiary company of Gazprom Neft PJSC specializing in production and sales of a wide range engine, transmission, hydraulic and industrial oils, greases and technical fluids. It was established in November 2007. The company has 6 production sites in Russia, Italy and Serbia. Overall production is 500K tones of high-quality oils, greases and technical fluids per year. Omsk Lubricants Plant owns the Russia’s most modern complex for oil blending, canning and packaging with 300K tones of total annual capacity of.