Gazpromneft-Lubricants maintained its dominance on the Russian marine oils market in 2016. 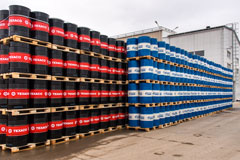 Gazpromneft-Lubricants increased its share of marine oils shipments in Russia by 10% in 2016, bringing it to 36% on the national market.

In 2016 the oil business operator of Gazprom Neft sold about 14,000 tons of lubricants for the marine industry, thus ensuring a 55% increase over 2015. Product shipments to foreign ship owners in Russian ports more than doubled (up to 2.2 thousand tons), and the importing of marine lubricants to the CIS and the Baltics also increased 2.5 times (up to 1.5 thousand tons).

“We achieved top results in 2016 in marine lubricants due to the systematic expansion of the supply network in all ports of Russian Federation, setting up efficient client and marketing support, and expanding our unique technical services,” says Alexander Trukhan, General Director of Gazpromneft-Lubricants. “Our strategy is aimed at further expanding the marine lubricant line, where we plan to introduce a new brand of specialized lubricants onto the market.”