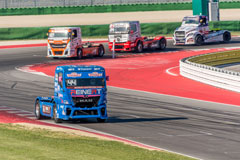 Gazpromneft Lubricants has launched the annual testing program for G-Energy Racing sports engine oils in European Truck Racing Championship. The range of activities includes sampling and monitoring of the oil used by means of the mobile laboratory at all stages of the championship.

The first testing took place was held in Italy within Grand Prix Misano when G-Energy racing oil was filled to the engine of G-Energy sports truck. Under the supervision of Gazpromneft-Lubricants technical specialists was performed a procedure to flush the engine oil system and G-Energy Racing SAE 10W-60 oil was topped up. Then in the end of each day of competition the engineers sampled the used oil for the further extended laboratory analysis. 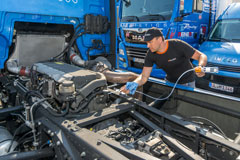 European Truck Racing Championship is held at the famous racing trucks such as Nurnburgring, Le Mans, Misano and is ranked as the one of the strongest in this type of races. The participants of the European Championship are sports team from various countries, driving trucks of such leading international manufacturers as MAN, Mercedes, Iveco, Freightliner. Truck racing vehicles are assembled from serial components and assemblies, but undergo further refinement and tuning of the electronic system. 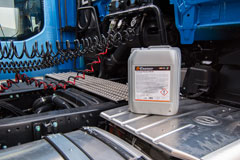 "The truck racing feature is speed races, when engines operate at high speeds and with high power output, - says Roman Zimovets, Deputy General Director for Marketing and Strategic development, Gazpromneft-Lubricants. - These modes are extreme in normal truck operation, performance under such conditions helps to show maximum capacity and high-quality of G-Energy Racing oils and will allow us to move further on the way to improve products."