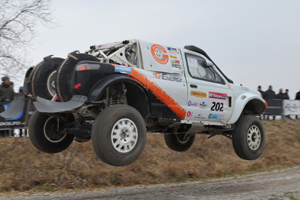 122 Crews took part in this year’s Italian Baja, including many famous racers and repeat award winners of various international motorsport events. The 20th anniversary Italian Baja traditionally could not do without G-Force Proto on the podium – Bogdan Novitsky came third in Т1.1. in his in-house prototype.

Boris Gadasin and Vladimir Vasiliev, despite being allowed to compete only on the second day, showed their marvelous technique and great potential of G-Force Motorsport equipment: Boris Gadasin won four special stages, came second once and was third twice on the time sheets; Vladimir Vasiliev was second to pass an SS.

This is the first time the new Proto is presented to the Italian media. Boris Gadasin showed the best of it and also told about the preparation for the Silk Way Marathon Rally, where two new cars will be demonstrated. 350-400 Horsepower proto design features special suspension system: front independent A-arm suspension and rear beam. Modular packaging not only provides optimal arrangement of components and makes maintenance operations easier but minimizes the risk of failure. The proto’s design, equipment and functionality have been developed basing on the team’s world rally-raids experience and peculiarities of any type of a track surface – from sand drifts to deep-water fording and forest lanes. The new car unlocked its potential when it first appeared in the Northern Forest Baja (Russia) this February. There, Boris Gadasin started the race as a ‘zero car’ and demonstrated the best SS performance. However, this time the G-Force proto appeared as a testing show car. 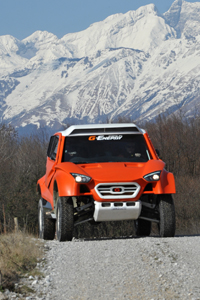 Last weekend, G-Force’s partner Gazpromneft Lubricants unveiled its new G-Energy Racing oils range for use in professional racing cars. The oils are formulated from synthetic base stock (polyalphaolefins) with polyesters and advanced additive system. G-Energy Racing will be soon introduced into the market for passenger sports car owners.

“Gazpromneft Lubricants uses the leading lubricant production technology in Russia. Our company focuses its investment on the development of its own manufacturing sites that enable us to offer high-quality products meeting the most stringent standards and requirements of leading automotive OEMs. Designing oils for race cars has become a new challenging R&D project that proves high quality of our products. The launch of G-Energy Racing series of oils has become real with our long-term and successful business strategy. Fast widening of our Premium products range in 2012 came as the result of production facilities expansion and intensive promotion,” – says Alexander Trukhan, General Director, Gazpromneft Lubricants.

The oils are now being tested under extreme conditions of rallying, in G-Force Motorsport’s race cars.

“Testing the new prototype on the Italian track is an important step in getting ready for the first “fight.” Hard and almost extreme conditions are also a perfect ground for lubricants testing. Our newly designed car uses new G-Energy products. And judging by the engine behavior the oils show great results,” – says Boris Gadasin, design engineer, driver, G-Force Motorsport.

* The final results of the Italian Baja will be announced after considering G-Force Motorsport’s appeal against being excluded from the first day competition and when the differences in car technical specifications rules are resolved.