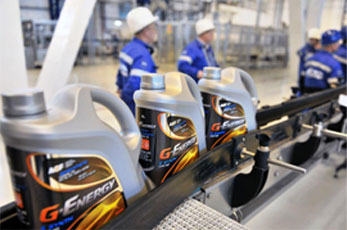 Gazpromneft Lubricants Ltd., a subsidiary of Gazprom Neft for lubricants production and marketing, developed a long-term business strategy until 2025.

By 2025, Gazpromneft Lubricants will have increased its total production volume to 633,000 tons, which is 40% as high as the 2012 volume. 330,000 tons of this amount will consist of high-quality packaged oils intended for Russian and global markets. By 2025, the company reckons to occupy 18% of the Russian lubricants market.

Gazpromneft Lubricants’ medium and long-term projects include implementation of a number of investments programs. Group 2 and 3 base oils production (absent in Russia as of today) at the Omsk Lubricants Plant is among them. The company also plans to expand its Moscow lubricant and grease production facility. In 2013, the second modernization stage will be completed at the Omsk Lubricants Plant for blending and packaging. The first stage was launched in 2012. The aggregate amount of investments in lubricant production in 2013-2025 will be approximately estimated at 20.8 bln RUR.

Gazpromneft Lubricants is targeted on enhancing competitive advantage through widening its product portfolio, designing new products that meet the latest standards, and developing technical engineering services for its customers with the support of global OEMs. The company will further extend the distribution network and promote its products through premium sales channels, primarily at independent and authorized workshops.

Today, Gazprom Neft’s lubricants production and marketing business is rapidly developing both in Russian and global markets. Gazpromneft Lubricants exceeded its key figures specified by the 2012 strategy. The company’s portfolio was widened 1.5 times up to 400 kinds of lubricants (1,300 product items). New product lines were introduced in the market including Texaco Marine Oils, synthetic oils for commercial vehicles and G-Energy Antifreeze coolants. That same year, Gazpromneft Lubricants’ market share in Russia jumped from 10 to 14 per cent. The G-Energy annual Russian sales volume grew to 10,000 tons in Russia. Last year, the lubricants supplier increased 1.7 times its packaging capacity – up to 172,000 tons. From 2008 through 2012 the investment in manufacturing facility improvement has reached 6.5 bln RUR.

“Lubricants business extension along with long-term projections will enable us to keep the rapid pace of development up to 2025 enhancing our company’s presence in the market. One of the major competitive advantages of Gazpromneft Lubricants has always been strong R&D facility and the focus on implementing world’s latest production technologies at manufacturing sites of Russia to provide Russian consumers with high-quality products,” – says Levan Kadagidze, Commercial Head, Gazprom Neft.

Gazpromneft Lubricants Ltd. is a subsidiary of Gazprom Neft for production and marketing of lubricants, greases and specialty fluids. Founded November, 2007 with the aim to strengthen Gazprom Neft's lubricants business, our company now operates five manufacturing facilities in Russia, Italy and Serbia with total blending capacity of 450,000 tons of high-quality lubricants and greases.