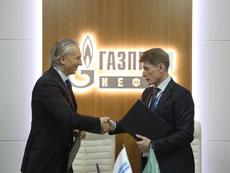 During the Sochi International Investment Forum, Gazprom Neft entered into a number of agreements to expand the company’s geography of lubricant deliveries and supply Russian products to the municipal and regional enterprises of RF subject entities.

Under the cooperation agreement signed by Gazprom Neft Chairman of the Board, Alexander Dyukov, and Governor of the Sakhalin Region, Oleg Kozhemyako, the operator of the Gazprom Neft oil business, Gazpromneft-Lubricants will expand oil shipments under the brand names Gazpromneft and G-Energy for regional urban and municipal enterprises. The priority of import-substitution is the energy sphere, HCS and the industrial complex. The experts estimate that the annual demand for lubricants by the Sakhalin Region is currently 7.3 thousand tonnes, of which over 60% is imported. 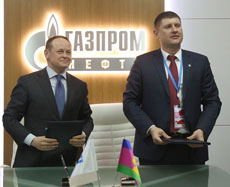 A similar agreement was entered into with the Krasnodar Krai. Under the agreements, Gazpromneft-Lubricants will increase its deliveries of high-quality oils and lubricants to the region for servicing vehicles, various units and industrial equipment. The Krasnodar Krai currently consumes about 19,000 tonnes of lubricants per year, 25% of which are imported. This agreement will meet the needs of the production and municipal enterprises, thus significantly reducing the region’s dependence on imports.

Alexander Dyukov, Gazprom Neft Chairman of the Board noted: “The efficiency of production and the product quality are the components that determine Gazprom Neft’s competitiveness in all segments of the petroleum product market. The lubricants market is not an exception, and following such a business philosophy will allow the company to increase its oil and lubricants sales, even when their overall consumption level is dropping in the country. Because the quality of Gazprom Neft’s lubricants meets the highest international standards and they have clearances from the leading world equipment manufacturers, we can reinforce our domestic market position and successfully replace the more expensive foreign products with a quality analogue. The current import-substitution is one of the most important trends where we are not only increasing product sales and expanding our geographic deliveries, but also helping to develop the economy of Russian regions”.