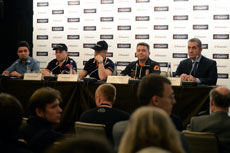 The crew of G-Energy Team (Vladimir Vasilyev and Konstantin Zhiltsov) and supported by Gazpromneft-Lubricants Ltd will take part in the famous off-road 2016 Dakar Rally on Toyota Hilux.

The Dakar is duly considered the most extreme race on the planet. The contest will start on January 2, 2016 in Buenos Aires. This time, the route will transport the rally raid across alpine, rocky and desert landscapes of Argentina and Bolivia. The racers will finish on January 16 in Rosario, Argentina. 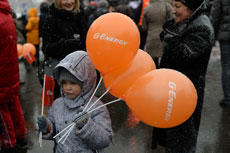 Last weekend there was a ceremonial start of the team from Moscow. More than five thousand people came to the Revolution Square to wish good luck to the crew. Spectators in the fan zone will be able to try themselves as drivers at the wheel of rally simulators, to learn interesting facts about "Dakar" and to leave wishes to the crew of G-Energy Team. A separate entertainment program has been organized for orphaned children: workshops and competitions on the knowledge of traffic rules, gifts giving and an autograph session with the drivers.

It is not the first year that the manufacturer of G-Energy premium oils Gazpromneft-Lubricants Ltd supports the racers. Director General of the company Alexander Trukhan said: "A special range of G-Energy Racing oils guarantees uninterrupted operation of the race car engine in extreme conditions of an off-road rally. However, fault-free performance of the technical components is hardly enough to guarantee victory. That is why I wish Vladimir Vasilyev and Konstantin Zhiltsov all the best at the Dakar". 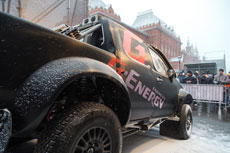 G-Energy Team pilot Vladimir Vasilyev said: "We are ready for the rally marathon and another speed and endurance trial for our crew. In January, we will test our new vehicle ToyotaHilux SUV and hope to show a decent result. Nothing sets you up for a victory better than the support from your fellow citizens. Thanks a lot to our fans".