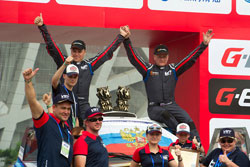 On Sunday, participants of the rally raid reached the capital of China having passed by the Great Wall. The awarding ceremony took place in the Olympic Park of Beijing. After leaving Moscow more than two weeks ago, the participants drove more than 10 thousand kilometers. 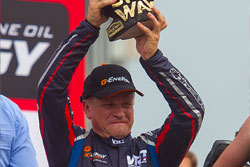 Crew of G-Energy Team perfectly got through the Silky Way distance. During the rally raid, the Russians finished up in top 3 places in MINI in 7 of 12 special stages.

The French Cyril Despres and David Castera in Peugeot became the Silky Way winners among SUVs. The second position in the overall standing was taken by the crew in MINI of the Saudi Yazeed Al-Rajhi and the German Timo Gottschalk. 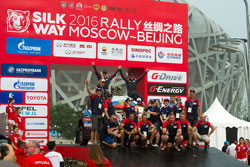 "G-Energy Racing oils used during this rather extreme race have passed tests successfully. Our technology professionals accompanied the crew of G-Energy Team along the whole distance of the rally raid, monitoring the lubricants in the mobile laboratory. All data retrieved are used for development of new production", says Alexander Trukhan, Director General of the Gazprom Neft — Lubricants company.

"We have come to the finish, to the podium. The last special stage was passed not badly. The Silky Way race was high-speed”, - says Vladimir Vasiliev, the G-Energy Team pilot. “G-Energy oil perfectly suits such races as Silky Way, there were no problems with it. Its use was one of the things which helped us to cope with all difficulties and tests of this marathon."

Gazpromneft – Lubricants (Gazpromneft – Lubricants LLC) is a subsidiary of Gazpromneft that specializes in the production and sale of oils, lubricants and technical fluids. Established in November 2007. Gazpromneft – Lubricants has 6 production sites in Russia, Italy and Serbia. Our total production volume amounts to 500,000 tons of high-quality oils, lubricants and technical fluids every year. The Omsk Lubricant Plant (OZSM) is Russia’s most state-of-the-art complex for mixing, filling and packaging of oils with the total annual mixing and packaging capacity of 300,000 tons. The management system in place at Gazpromneft – Lubricants and its production facilities conform to the stringent requirements of the international standards ISO 9001, ISO 14001, ISO 16949, and OHSAS 18001. The company supplies its products to the Russian assembly lines of DAIMLER KAMAZ RUS, KZ ROSTSELMASH, DERWAYS AC, KAMAZ, AVTOTOR (Hyundai assembly line), AZ GAZ, UAZ (Sollers), and BELAZ. Consumers of Gazpromneft – Lubricants products include Severstal, Sibur, Gazprom, Evraz, MMK, TMK, NLMK, Rusal, Alrosa, RZD, and other leading industrial enterprises. The range includes 500 brands of oils and lubricants for all market sectors (more than 1,200 items of goods). The company’s products have earned the approval of more than 250 leading equipment manufacturers: BMW, Mercedes-Benz, Volkswagen, Volvo, Renault, General Motors, Cummins, MAN, ZF, KAMAZ, Avtovaz, Bosch Rexroth, and others. The company controls 15% of the Russian lubricant market and also operates in the CIS and the Baltics, Europe, Central and Southeast Asia, Africa, and beyond. In all, the company’s products are sold in more than 60 countries worldwide.