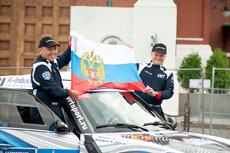 Crew of G-Energy Team performing in the Silky Way rally marathon, sponsored by the Gazprom Neft — Lubricants company, took the 4th place at the sixth stage, having covered the distance in 1 hour 14 minutes, and 4 seconds. Vladimir Vasiliev and Konstantin Zhiltsov in the MINI All4 Racing car yielded only 2 minutes 42 seconds to the leader. This result handed a victory to the Russians in the standing of the 3rd stage of the Rally Raid Russian Championship which was finished the day before in Kazakhstan, and returned the crew to the top three of the Silky Way rally marathon.

The route of the rally sixth stage was between lakes on sandy routes and meandering tracks. The start was in Balkhash, and the finish - in Almaty. The high-speed special stage distance was seriously reduced because of storm warning. 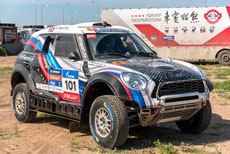 "We feel perfect – our mood is combative, our car is in order. We struggle with ourselves, with the route, with eminent rivals - Stéphane Peterhansel and Sebastien Loeb. Other participants of this race are strong, but it’s not a surprise – we are ready to combat as equals. Difficulties don't frighten us, the fight goes on!" 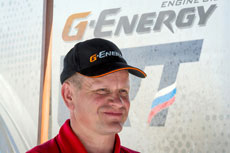 "The route is good, fast. There are a lot of difficult moments in navigation. The weather is enervating; it is extremely hard for the crew and technique. In such conditions it is very important for us to have a continued technical support by Gazprom Neft – lubricants experts who monitor the engine of our car working with G-Energy oil." 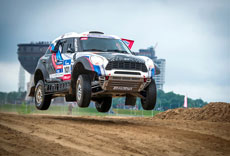 “Silky Way is a test not only for pilots, but also for technique which works at breaking point. Our technology professionals accompany the G-Energy Team and MAZ-SPORTauto crews, which is also well performing in this race in the truck standing. In our mobile laboratory right along the route, the most difficult tests are carried out, which makes it possible to monitor operation of oils. Test results in the most difficult conditions of off-road races prove high reliability of G-Energy production which can ensure smooth operation of the most difficult technique."

Silky Way Rally – the international rally raid carried out since 2009 in the territory of Russia, and also the states of Central and East Asia. In the first year, the route of rally also passed through the territories of Kazakhstan and Turkmenistan. Rally of 2016 will take place in the territories of three states – Russia, Kazakhstan, and China. Its distance will make 10,735 km, 4,105 km of them are sporting sections.

G-Energy Team – crew consists of Vladimir Vasiliev and Konstantin Zhiltsov. Today it is one of the strongest Russian crews in rally raids. Vladimir Vasiliev is a Champion of Russia, the pilot of the FIA priority list. Konstantin Zhiltsov is a multiple Champion of Russia, both in the rank of a pilot, and a navigator, participates in rally raids for more than 20 years. In 2014, the crew of G-Energy Team, sponsored by the Gazprom Neft — Lubricants company, becomes the Rally Raid Champion of Russia and the owner of the World Cup for rally raids. In Dakar-2015 rally marathon the crew finishes up in top five places in the final standing. In 2015, the crew had to change their car and technical support team in the middle of a season, but, despite non-marginal changes, Vladimir Vasiliev and Konstantin Zhiltsov manage to come second in the World Cup for rally raids and to finish up in top ten places at the 8th stage in the Dakar-2016 rally marathon.