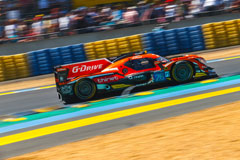 In mid-June within the near encounter tests previous to the prestigious 24 Hours of Le Mans race the G-Energy racing oil was topped up into the car engines of the G-Drive Racing team. In accordance with the agreement on scientific and technological cooperation between the team and Gazpromneft-Lubricants the company’s technical specialists will attend the race and monitor by means of the mobile laboratory the G-Energy oil samples filled into G-Drive Racing cars.

In 2017 the team will participate in the World Endurance Championship races taking place on the famous routes of Nuerburg, Mexico, Austin, Fuji, Shanghai and Bahrain.

The World Endurance Championship is a very interesting event where we can test our oils. In these hours of race cars drive on the track at ten tenths, with minimal breaks to change the pilot and for the maintenance. This rhythm is serious test run for G-Energy Racing.